Over 80 invited guests were present at Heicks und Teutenberg at the Fischmarkt in Cleves, Germany. The artist Elena Boccoli  is showing 13 of her works to the public. The hostess, Sigrun Heinzel praised Elena for her great work. A wide range of different style paintings  are to see until January 15, 2014.

Elena Boccoli, born in Maasbracht, The Netherlands, daughter of an Italian father and a Dutch mother. She is raised in Italy. First in Posada Sardinia and at the age of 22 she went to Piemonte. In 2000 she came back to the North and moved to Kranenburg Germany. In 2004 she moved to  Cleves. Here she lives since then and it was in this little town she developed her artistic activities.

Hundertwasser, an Austrian painter inspired Elena Boccoli.  It all started by copying a few of his works. Great patterns of colours and many characters and figures is typical  for his works and this appears in the paintings of Elena as well. She developed her own style and took a distance from her inspirer. From  abstract to surrealistic images in acrylic or oil paint. Many Cleves Sights and attractions are eternalized by her on canvas.

Cleves (German: Kleve) is a small town, about 30 kilometres from the Dutch city Nijmegen. Through time, Cleves is closely connected with The Netherlands. The duke Johan Maurits came back from Brasil to Europe and accepted the post of governor of  Cleves  in the 17th century. He gave this town wealth through a huge city park and attracted many dutch nobles and other important people to the city centre. In the 19th century the famous landscape painter Barend Cornelis Koekkoek came over from the Netherlands and established, downtown, his school of painting. In 1843 he constructed Belvedere and two years later his city palace. These are only a few examples of many famous people who came to Cleve.

When you enter the town via the Tiergartenstrasse, you will see on your left the Forstgarten, which is the second most impressive city parc of Germany. On the right side Kurhaus, a spa house from the 18th century which is a museum now. Further up many villas appear on both sides of the road. Most of the houses designed by Dutch architects for the rich from the Netherlands. Until the 19th century, most of the Cleveners lived in the upper town.

Elena Boccoli painted several architectural highlights. The Schwanenburg, Stiftskirche, Haus Koekkoek or the Schutzenhaus. Unfortunately this last building doesn’t exist anymore. Elena Boccoli brings back the house on canvas in a colorful pallet. Or paintings like the Elsabrunne from Karl-Henning Seemann, the Schüsterken from Jupp Brüx are all an ode to Cleves. 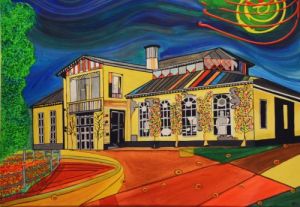 The paintings about Cleves are a real eye catcher as soon as you enter Heicks und Teutenberg. But as she has a wide orientation, the visitor is surprised by the pop-art stylish paintings in the back of the room. Definitely worth to pay attention to these paintings as well. 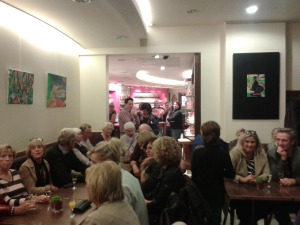 The Vernissage started at 7:30 pm. Half an hour before, several guests were standing in the doorway already. Shortly before the official opening the crowd entered the room at Heicks und Teutenberg. Young and old people. Business people, artists, families,pensioners etc. The hostess Sigrun Heinzel started the exposition by a speech. The guests were informed by a short impression of the artist Elena Boccoli. The second speaker was the artist herself. She thanked all the guest who came tonight in large numbers. Mannfred Hendricks composed piano music to lead the people from the first to the last painting. The catering was well taken care of by Heicks und Teutenberg. For everyone was enough food and drinks.
At 10 pm, unfortunately the evening came to an end. Everybody spoke out their compliments for the wonderful evening and a few potential buyers informed about the possibility to own one of Elena’s paintings. 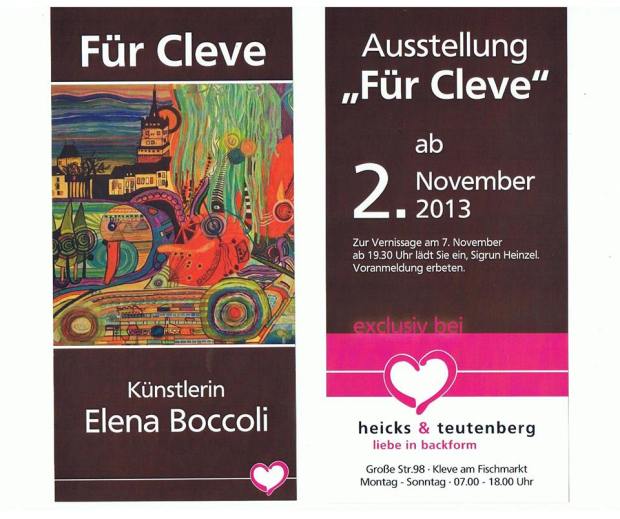